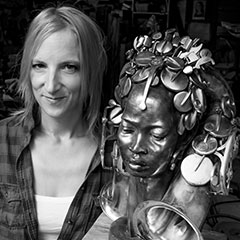 Sans Mots – no words! When the everyday life is characterized by one’s family as well as being a creative and artistically involved, many impressions merge on a daily basis. Therefore, it can be an easy task to run out of words from time to time. This is how Alexandra Lehmler feels like: She is on the one side a successful artist and on the other side a loving mother. Being the mother of three kids, she has never lost the urge to develop herself as a musician and realize her full potential. Two full-time jobs do not stop the saxophonist from Mannheim to handle her tasks with charm. “There are many parallels, rather it is a ravaged child’s room or a messy final rehearsal before a big gig. You are constantly surrounded by stress, but you will also be rewarded in return. You just have to balance it out and find the good in the bad”, describes Lehmler her daily life.

As a result of her creativity, her meanwhile 5th album – Sans Mots – was released in February 2017 on the Mannheim based label JAZZNARTS RECORDS. For this album, she gained her inspiration from several artists. Lehmler had the chance to experience Franck Tortiller, Patrice Héral, and Herbert Joos during a live concert of the Orchestre National de Jazz in Paris. She immediately engaged them for another concert. “For a long time, I wanted to make music with Patrice, Franck, and Herbert. For my new album this wish came true. Even during the rehearsals, there was a magical vibe going on, and we were all amazed by the final result.” The French vibraphonist Franck Tortiller is, same as the percussionist Patrice Héral, widely known across his country, for example as the director of the Orchestre National de Jazz. Herbert Joos on trumpet is a special guest. Since more than 50 years, Joos has had a great impact on the international jazz scene and was awarded in 2017 for his musical lifetime achievement by the German state of Baden-Württemberg. He is definitely at the forefront of European jazz composers. Matthias Debus complements the quintet on bass. He is one of the most active musicians within the Rhine-Neckar-Region and also Lehmler’s husband. Many pieces on Sans Mots are written by the bassist.