"Brian Auger is one of the best B-3 artists I have ever heard in my life. His technique is awesome and the amount of energy he generates is unparalleled and relentless. He is a tremendous talent with a wonderfully warm and compassionate personality, a combination that is hard to beat. He deserves all the accolades."
Herbie Hancock, May 1995 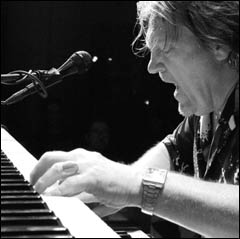 "His power and love for the music was the foundation for one of the most memorable tours I have ever done. With this great solid foundation it made it possible for us to blow free! Brian is a true inspiration to work with despite the fact he is an Englishman. Brian is a bad Mutha...!!!"
Les McCann, May 1995

"Brian Auger is a superb technician on his instrument, but he also plays with feeling that is a rarity. I am looking forward in recording with him in the near future."
Eddie Harris, May 1995

"Brian is one of the originators of the high energy Hammond organ style along with Larry Young in the tradition of Jimmy Smith. I remember in the late sixties when Brian and I were in London together our paths crossed at different times both socially and also playing with the likes of Jimi Hendrix and the guys from that great band of Cream.
I consider Brian a great friend and musician"
Tony Williams, June 1995

"Mr. Brian Auger is a personal friend and great artist. I have had the opportunity to work with Brian just as a trio, he made his keyboard sound like a big band! He is a composer, arranger, complete keyboard player, a great accompanist. I enjoy playing with Brian, he can really make it happen."
Louis Bellson, June 1995

"Those who remain oblivious to the obvious delights of Brian Auger's Oblivion Express do so at their own risk!"
Beastie Boys, June 1995

"When I first heard Brian's album "Definitely What", I could not believe how ahead of it's time it was. A visionary is his own time, with music that still comes over fresh today - and he's still doing it just as great - keep up the good work mate!"
Simon Bartholomew, The Brand New Heavies, June 1995